There might have been a beautiful dawn chorus, but I don’t think any of our group were up to hear it! Having been out late the night before looking for the kiwi, there were a few of us that took the opportunity to sleep in a little.

We breakfasted, had a quick clean up and then packed the gear up and then headed down to the wharf. On the way we had a really close kokako feeding on pigeonwood leaves for about 5 minutes. Really nice to see these birds so close and for so long. We saw most of the common suspects on the way down, with great views of stitchbird, saddleback, whitehead, etc. We met the water taxi at the end of the wharf and headed back across to the mainland with very nice calm conditions and a blue sky. On the way we saw a little penguin, but not much else in the way of seabirds. Packing the vehicle up, we then headed on south, grabbing some lunch on the way and heading to Stillwater to try to find the shore plover that had been reported. We met with Martin Sanders, the person responsible for finding the bird, and he showed us to the sandspit at the entrance to the estuary, where there are two pairs of NZ dotterel breeding. We were lucky enough to be able to scope the nest with eggs of the one and get really close views of the adults, and then saw the other pair with two very small chicks. There were also variable oystercatchers breeding and several pied oystercatchers on the beach…but no shore plover. Still, it was worth a try.

Back at the van we heaed south through Auckland and then on to Miranda, where we checked into our accomodation before heading to the new hide at the Lime Works. We scanned and found a group of Pacific golden plovers roosting in the saltmarsh vegetation, and then from the hide had stunning close views of wrybill feeding on the mud right in front of us. Little rippers they are!

Off a bit further out were large numbers of bar-tailed godwit, red-knot, pied oystercatchers, and pied stilts. There was also a colony of black-billed gulls looking like they were going to breed out on the shellbanks, with courtship and mating going on, and then Phil managed to find a couple of curlew sandpipers feeding on the mud. Good views of them, before we decided to head on and see what else we could. As we drove out we had great views of a really close buff-banded rail feeding and walking over the mud, flicking its tail as it went. Then we stopped and checked the Stilt Pond and found five sharp-tailed sandpipers feeding and the long-standing marsh sandpiper feeding amongst the pied stilts. Excellent!

We then checked out another spot, but nothing of note, so it was time for dinner at the Kaiaua Fish Resturant – if you like fish and chicps this is the place to dine. Beautiful fresh fish and seafood, and the rumbling bellies were stalled for yet another night! 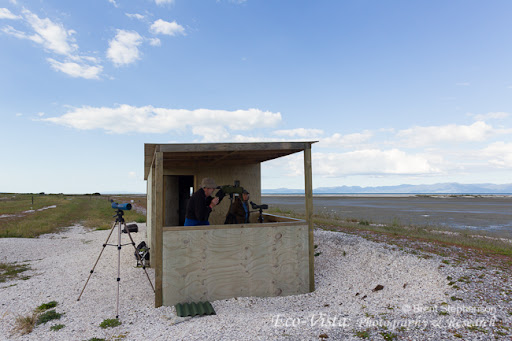 Checking out the birds from the new hide at Miranda.

Posted by Eco-Vista | Brent Stephenson at 21:53