So we had a great Bird Fair at Rutland Water.  The third that I have attended representing Wrybill Birding Tours, NZ and the first that both Sav and I have attended.  Friday was a busy day, as always this is the day where most serious interest seems to be shown.  Saturday was pretty quiet and Sunday was a little better.  A lot of interest being shown in New Zealand still, which is great to see considering the current state of 'financial' affairs.

Nice to also catch up with a bunch of past clients, a friends and colleagues from around the World.  A big thanks to Albatross Encounter whom we shared a stand with, and great to hang out with the rest of the kiwi exhibitors.

Mum and Dad had spent time up around the local area in their campervan and then picked me up yesterday morning.  We headed back to their place and being the sort of person that loves to watch others working hard took a few photos of the old boy digging his spuds.  I know this will be enjoyed by a few people around the place!

Leave tomorrow morning for London, and then back to NZ.  Looking forward to getting home as this has been a long but enjoyable three and a bit months.  Hard to believe its been that long actually, and managed to see a few good things and get a couple of nice photos along the way! 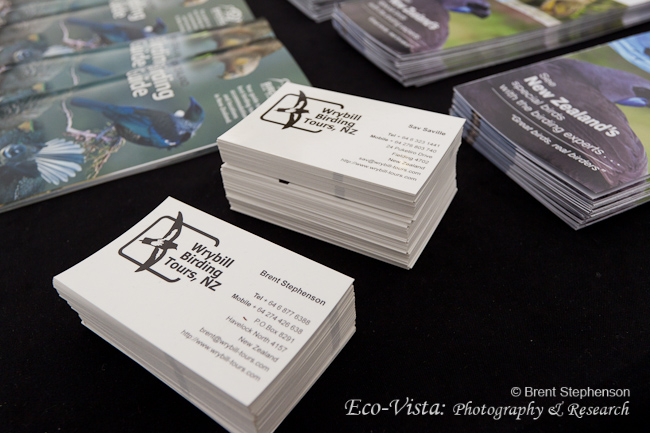 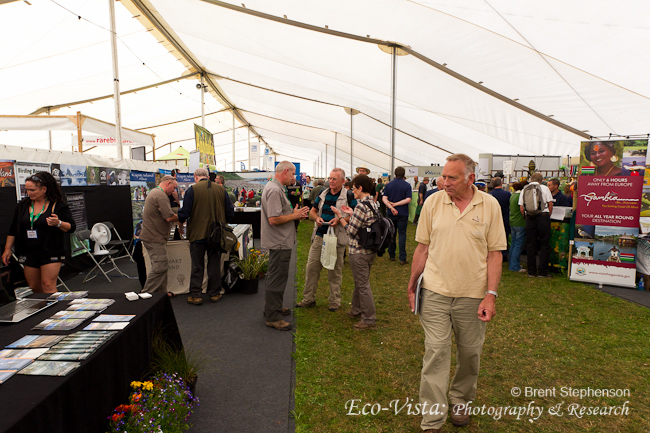 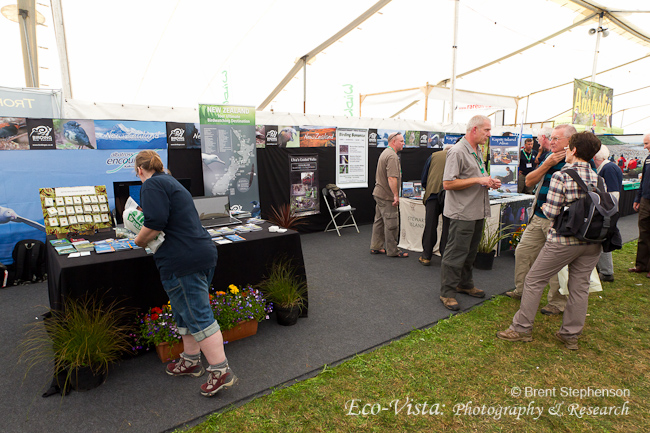 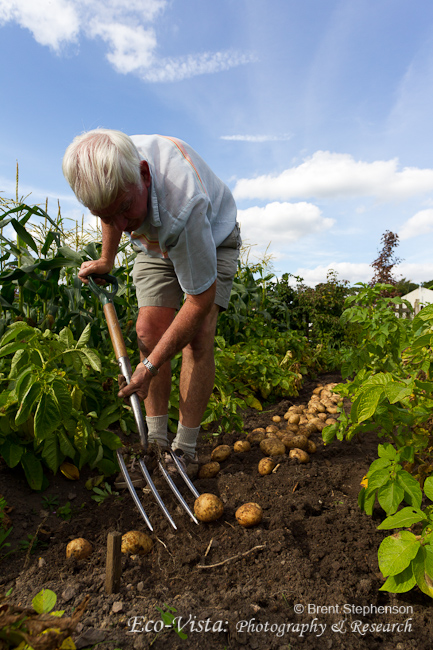 To the Bird Fair Batman!

Well it is that time of the yea again.  We are packing up the campervan this morning and heading to Rutland Water.  My folks are dropping me at the Bird Fair and then doing some tripping around the area, whilst I spend the three full days at the Bird Fair.  Should be another great event (as always), and looking forward to meeting lots of people there.  Sav will also be there this time, his first time in many years, and the first since we started Wrybill Birding Tours, NZ.

So if you are at the Bird Fair, or thinking about a birding tour to New Zealand, drop by and see us.  We are sharing a Stand with Albatross Encounter again this year - Marquee 4, Stands 46/47!  Hope to see you all there.

Up, up and away

So yesterday afternoon I headed out with Uncle Wilf to release some of his young birds on a training run.  Part of the regime of pigeon racing is not only exercising your birds around home, but also taking them out to certain locations that may be useful for the birds in later races, and letting them familiarise themselves with the lay of the land, as well as helping them to build up endurance and fitness.

So with 38 youngsters in the back of the ute we headed through to a secret location on the banks of the Severn River (actually I'm not sure it is secret, but it sounds better anyway).  The weather in the morning had been typically British summerery type weather, wind, wetting drizzle and cool, but by lunchtime it was looking better, and as we navigated the narrow country lanes near the release site the sun was actually shining...should have brought my sunscreen (yeah right!).  Anyway, we started to get the cages out of the ute and put them up on a stop-bank wall when three kids, Jill and another lady came along.  They were pretty keen on seeing the birds released, and as Wilf opened the trap-doors they watched as the pigeons took to the skies and circled, before heading off up the river.  We let the four baskets of birds go, and then headed home, hopefully to find the birds quietly tucked up in their lofts.  We arrived and most of the birds had arrived back, but somehow some of the birds had become split, and we were waiting on a few to get back.  Sometimes I guess they can become split of their own accord, but sometimes it might also be the local peregrines working the flocks and splitting birds off.  Anyway, by the end of the day all of the birds had arrived home safely, and I also spent a bit of time taking photos of some of Wilf's hens exercising around the lofts.  Also got a few nice shots of the Welsh Beulah ewes that are grazing their farm, and the Leicester Border X lambs they have produced.  Nice looking sheep (no funny comments please!) with black and white faces.

There was then a bit of excitement with a hobby ripping through the area creating hell with the swallows and house martins.  We had seen him the other day, and Uncle Wilf has seen it a bit this summer, so suspect they are hanging around the area.  Was fantastic to watch it zipping around and at one stage went into full chase mode, swirling through the air after a swallow or martin.  They are so unbelievably manouverable it has to be seen to be believed, but all the swallows lived to see another day, with the bird not being successful.  It was in the area for a good few minutes on several occasions later on, and you could generally tell when it was about as all the birds would go mad, calling and twittering and diving around the place.  Even the jays down in the wood gave a few coughs.  When I got home and looked at my photos of the exercising pigeons I was astounded to see a distant diving hobby in the background of one of the photos!  Well it certainly looks like a hobby rather than a barn swallow!  Pretty cool, and another nice day in the Forest of Dean. 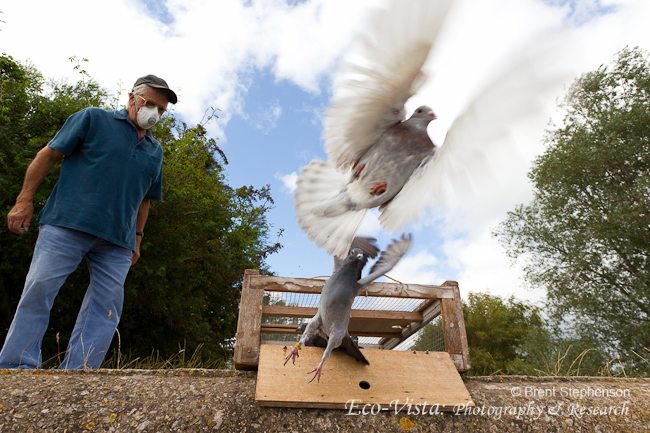 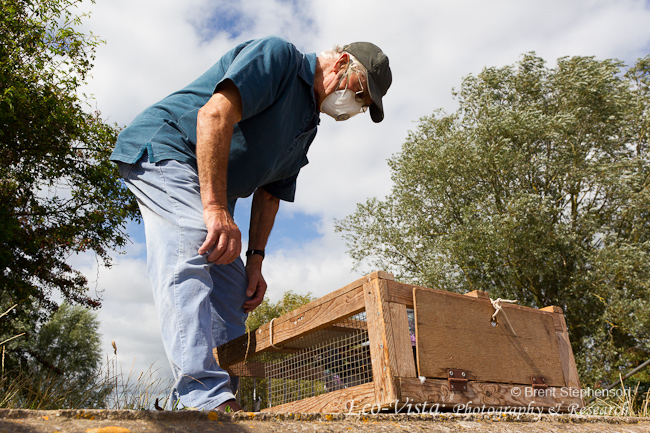 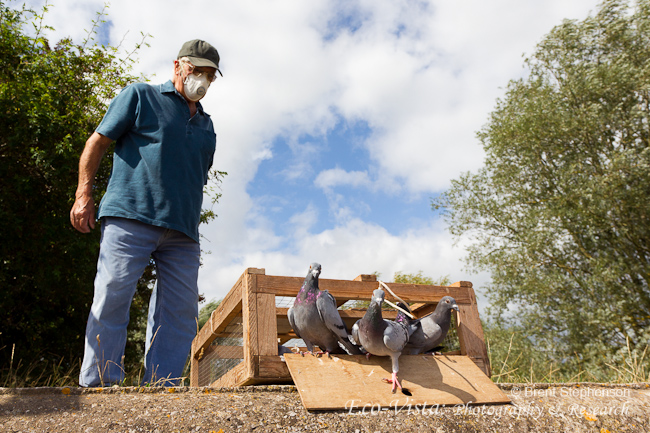 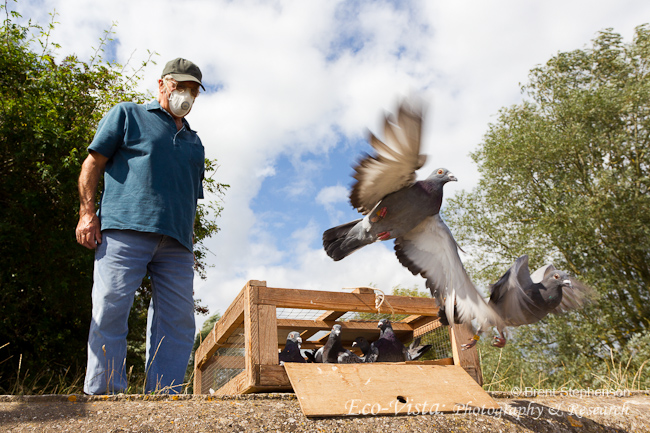 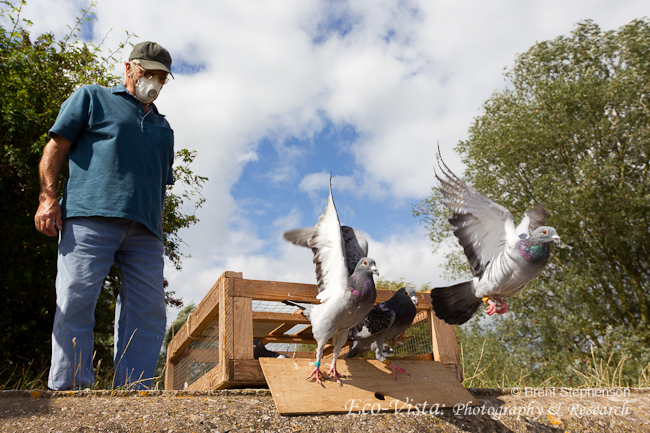 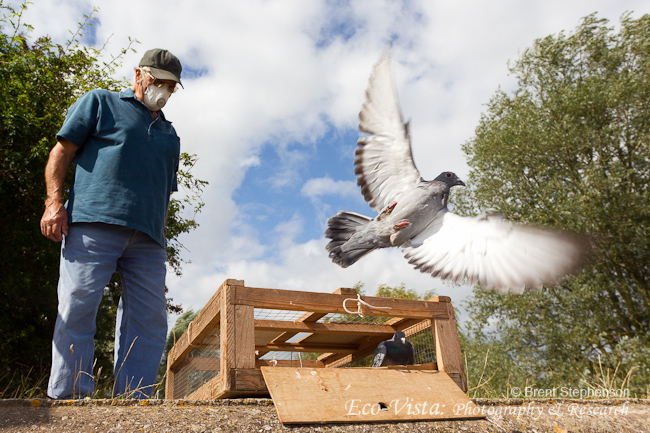 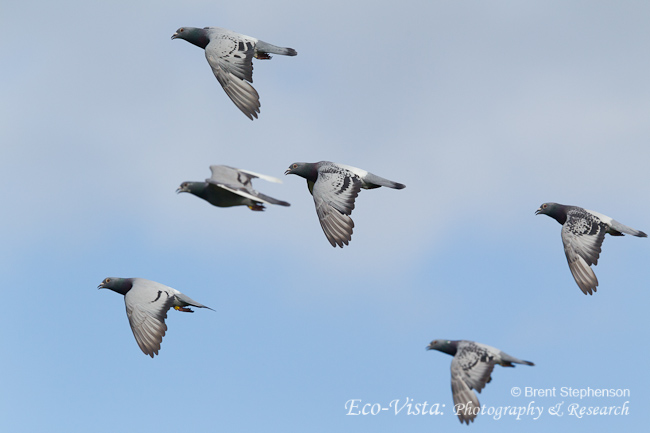 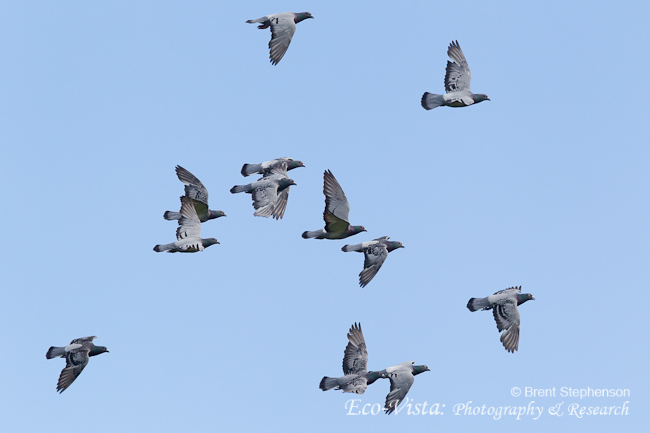 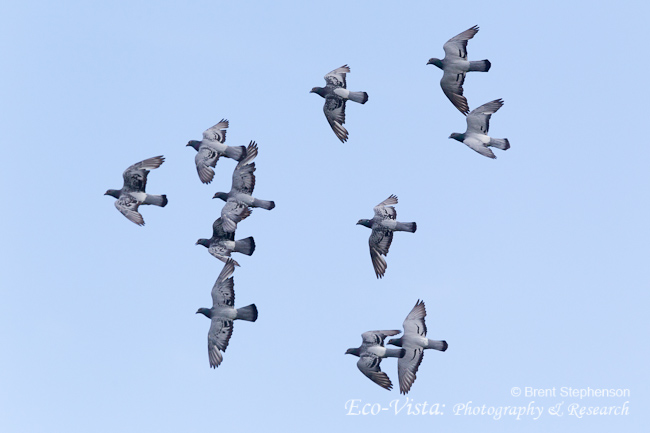 Fun in the Forest

Well yesterday the weather was actually quite nice, so would you believe it, I ventured outdoors!  Been sitting in front of the computer far too much lately, captioning and keywording images, so it was nice to get out and get a bit of fresh air, and the odd ray of sunshine.  Not sure that I got more than 1/100th of a daily dose of vitamin D, but oh well it was good anyway.  Dad had headed to Mum's Uncle and Aunt's earlier in the day, and then Mum and I headed there mid-morning.  We got a little waylaid, with me deciding some photos of the 'Cathedral of the Forest' (yep apparently that's what it is called!), the nice little church at Newland, might be good, especially with the weather the way it was.

We got down to Uncle Wilf and Aunty Janet's place just in time for a lovely cooked Sunday lunch, and then I mad a nuisance of myself there with my camera as well.  First off Uncle Wilf had some honey from his hives to deal with, so we spun that out, and got a few jars at least.  Then it was time to check out some of the medal winning pigeons.  Now Uncle Wilf is a bit of a legend in pigeon circles, having over the years amassed an impressive trophy room (and then there are the sheep dog medals and trophies as well) and been a pigeon nut for many years.  You don't need to search far on the internet to find info - like here.  So we did a bit of a photo shoot with both his two latest 'Barcelona hens', so named for having competed in and placed in these massive long distance races from Barcelona (and other locations down that way) back to little old Monmouthshire!  Barcelona back to Wilf's loft is 754.59 miles (1,214 kms) as the pigeon flies, pretty impressive stuff!  These two hens are the latest in a run of birds that have placed in these long distance races, and currently “Barcelona Lady" and “Barcelona Beau” are clearly loft favourites.  "Barcelona Lady" placed first into Wales in 2011 and "Barcelona Beau" 3rd.  We then had a look around the main racing loft, and I got some photos from inside, the results of which I think are quite special.  Uncle Wilf is so passionate about pigeons, and its hard not to get a little excited when talking to him about them, and seeing some of the birds that have done these incredible races.

I spotted four fallow hinds and their half grown fawns down in the field below, and so headed down there to see if I could get any photos.  The wind was not in my favour, and I'm sure I rushed things too much, so the end result was watching them leap back into the woods.  Never mind.  I was more successful with photos of 'Buster' a new recruit at the farm, and one whom I'm sure will bring many years of joy.  A real cute little dog.  So all in all a pretty nice day! 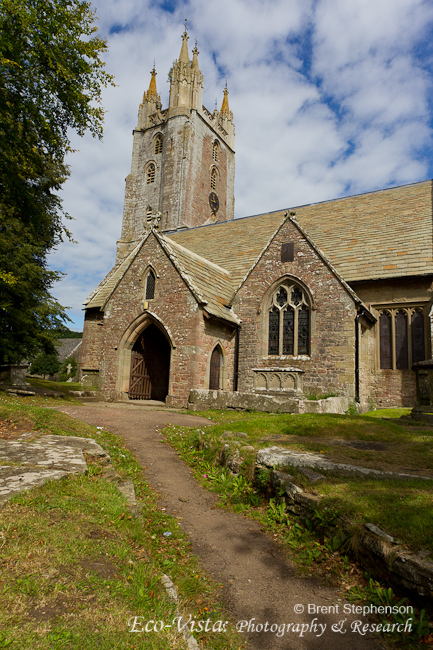 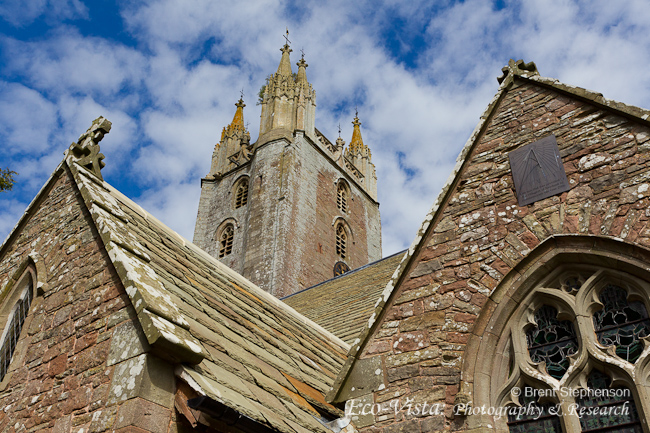 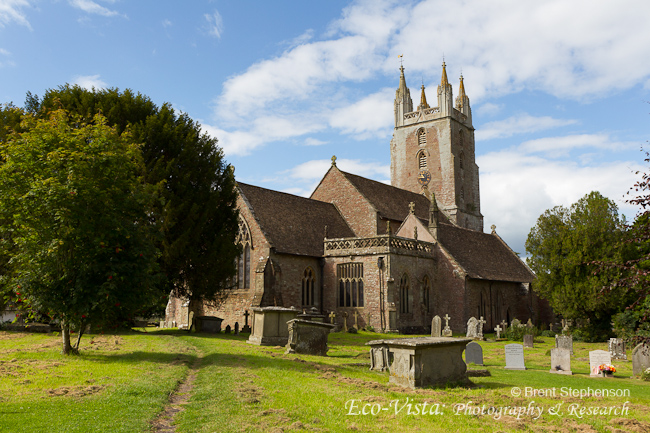