Leaving Miranda we headed inland towards a good site for bittern…or at least that is what we thought! We spent a good bit of time scanning an area that holds bittern but just couldn’t get one. The water levels were right, the sun was shining, and everyone had eaten their greens the night before…but it wasn’t to be! We did get a good view of a singing dunnock though! Small consolation, but hey you take what you can get. Another rather more strange sighting however, was a young pied cormorant on a freshwater wetland!

We headed on and checked another bunch of spots for bittern, but to no avail. So onwards to Whitianga to meet our pelagic. We headed up an over the Coromandel Range, passing through some stunning scenery, before hitting one of the best bakery’s on the peninsula – Olvers in Whitianga. You have got to try their Mussel pies (sorry guys I got the last one!). We checked into our accomodation, dropping pastry crumbs all over the carpets, and then headed down to the marina to meet the boat – Sapphire – skippered by Ian and Andy. These guys have been working with us for a few years now, so it is like a well oiled machine, safety briefing, info, and off out to the usual spot.

The sun was shining and the was just a light breeze as we headed out. A few little penguins and fluttering shearwaters started to appear and then the odd common diving petrel. Then some red-billed gulls and suddenly a parasitic jaeger appeared and chased the heck out of a red-billed gull. I haven’t seen this happen before, but actually caught it on camera as the jaeger flew upside down, actually flapping its wings whilst completely upside down mid-chase! These guys really are spectacular acrobats and deserve every last scrap of semi-digest fish they manage to steal!

We really encountered good numbers of diving petrels as we got out, and then a few flesh-footed and Buller’s shearwaters as the flutterers diappeared. We got out past the Mercury Islands and then encountered the usual schools of kahawai and trevally right on the surface with hundreds of Buller’s shearwaters and a few flutterers feeding with them. Very cool to see, but we wanted to get out deeper.

We soon hit the 100m drop off and then carried on a bit, but soon we started to get a few Cookilaria type petrels go past. We decied to stop and start chumming, and pretty soon had a few birds milling around. Then the Cookilaria petrels steadily drifted past. We had a couple of definitely Pycroft’s, with the jizz just being more bull-necked and then a couple of probable Cook’s, before most of the rest of the birds which came through in ones and twos seemed to be Pycroft’s. We had only a couple of white-faced storm-petrels come in to the slick, but a couple of grey-faced petrels swung by for very brief views. A couple of white-capped albatross came right in and spent some time, but a single Salvin’s albatross just carried right on by at a distance, not even showing any interest. A Northern giant petrel also came past quite a few times giving good views, but did not land. Little shearwaters came past in ones and also a two, giving relatively good views for that species, with all getting on to them. But still the Pycroft’s came, and everyone had pretty good views, even as a Mako shark came in and wrangled Andy for a barracuda head at the side of the boat!

As the late afternoon wore on we decided to start heading in. On the way in we again had lots of diving petrels and got some more good views of Pycroft’s which appeared to be starting to raft up in small numbers with some birds on the water and groups of others. Several more little shearwaters were seen.

Back at the marina we thanked our skippers and headed for a pizza and pasta dinner, of course with beer, and then to bed…phew! What a day! 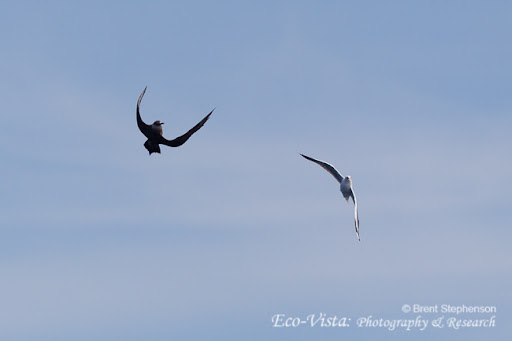 A parasitic jaeger flying upside down whilst chasing a red-billed gull trying to make it regurgitate. 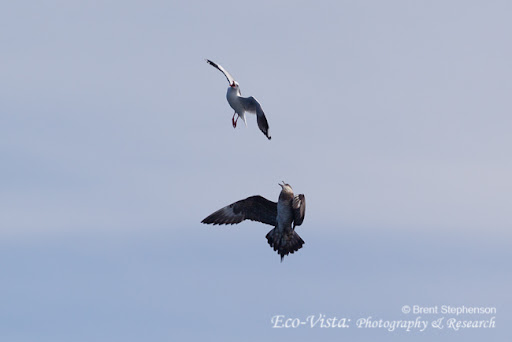 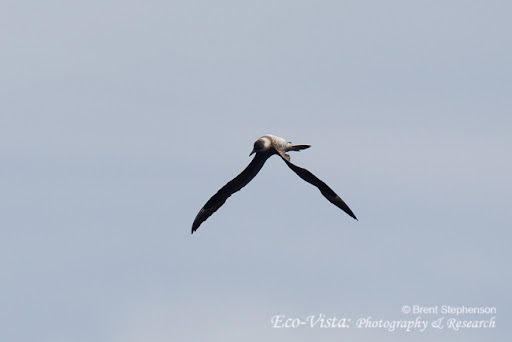 'Look at me!' - a parasitic jaeger completely upside down whilst flying. 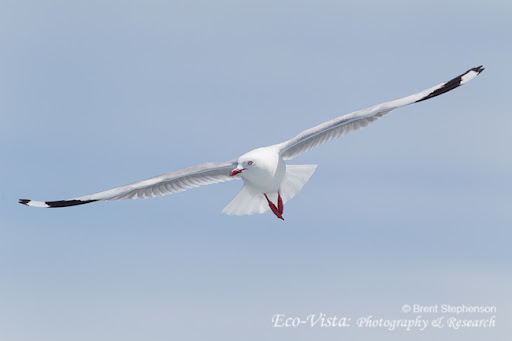 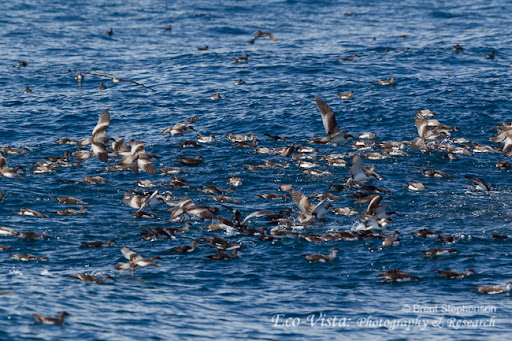 Buller's shearwaters feeding at a massive school of fish. 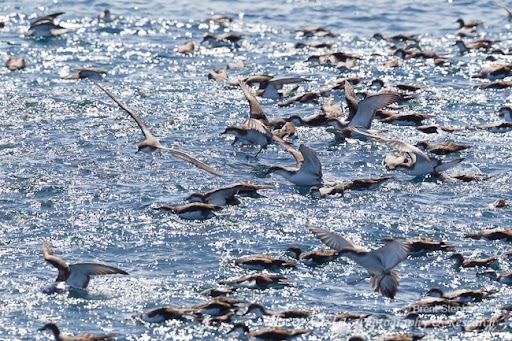 Really nice looking into the sun whilst these Buller's shearwaters feed. 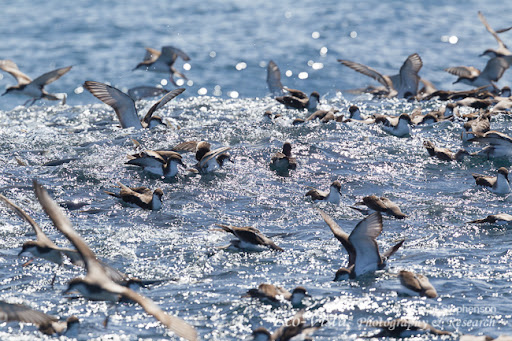 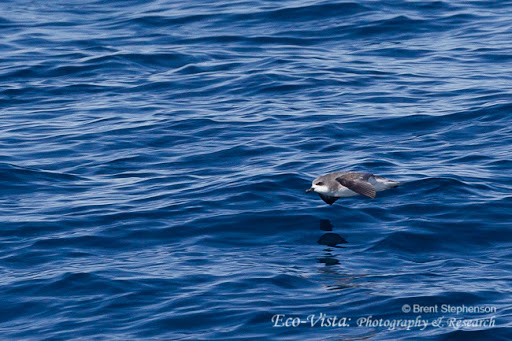 Pycroft's petrel zipping past, we had great views of this species. 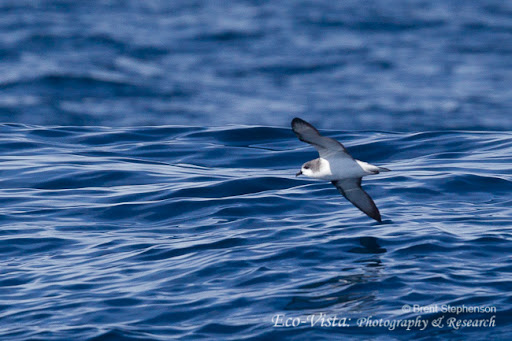 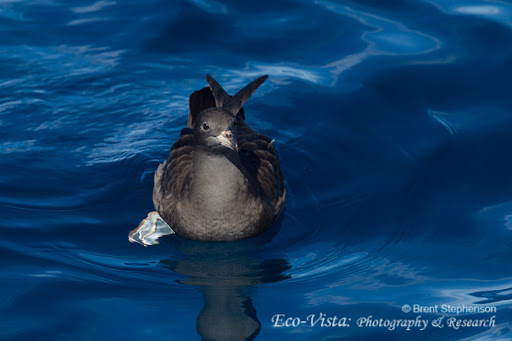 A flesh-footed shearwater says 'FEED ME!' 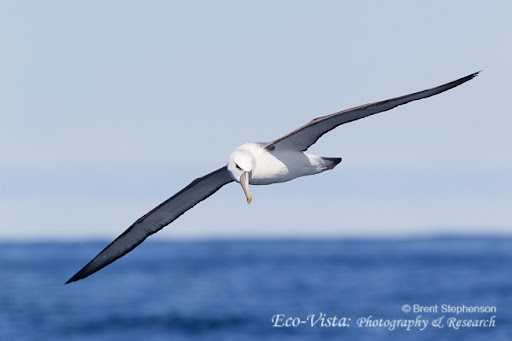 White-capped albatross doing a fly by, it did come in... 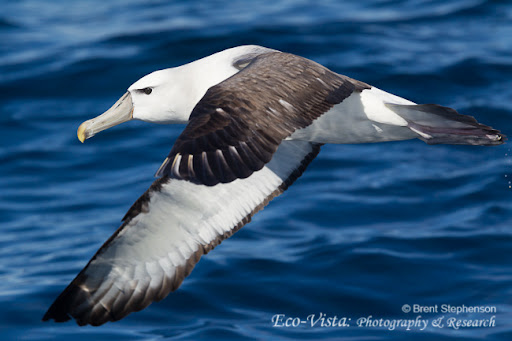 Having just taken off. 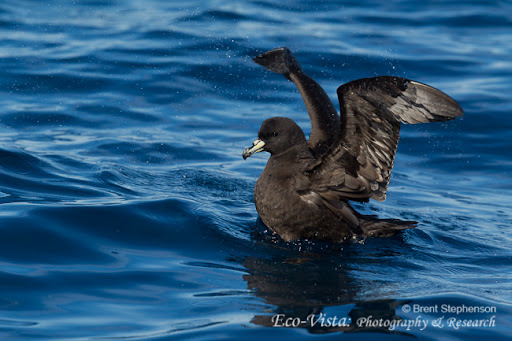 Black petrel shaking itself on the water. 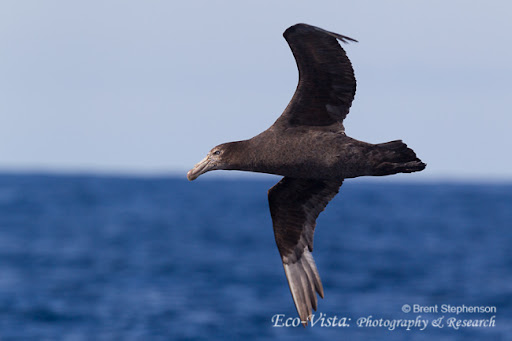 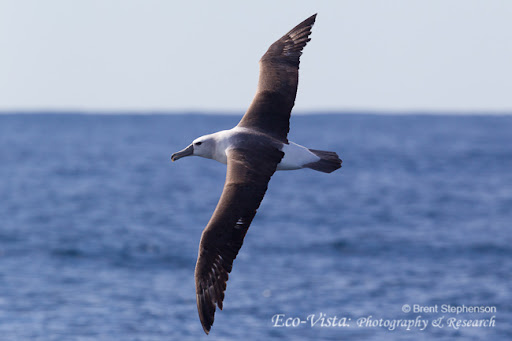 Whte-capped albatross almost against the sun. 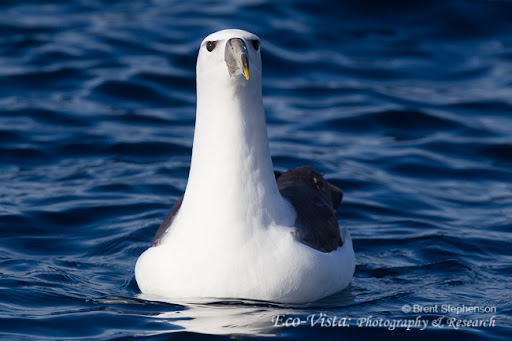 A white-capped albatross says 'FEED ME!'. 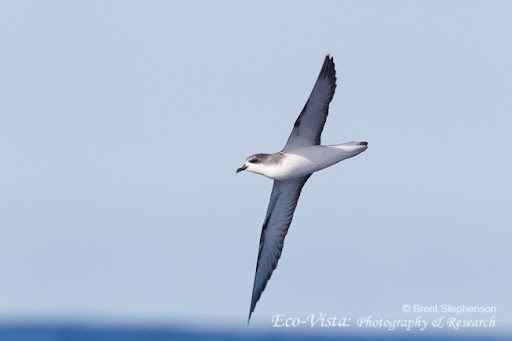 Pycroft's petrel coming in close, a strange stance with this one, some something we saw a couple of times as birds banked. 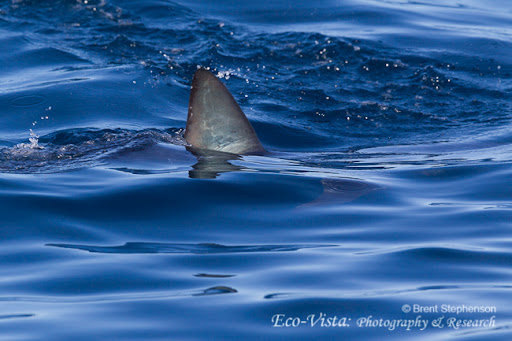 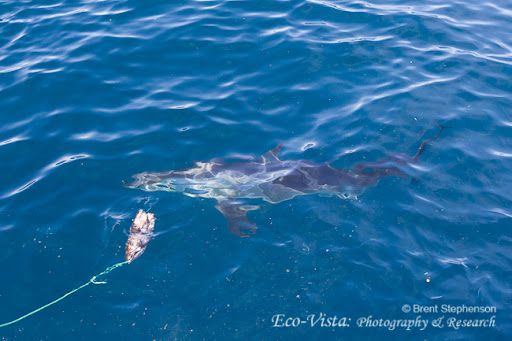 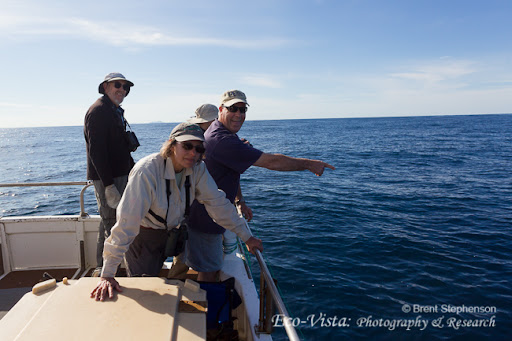 Andy pointing it out, thanks Andy we saw it ;) 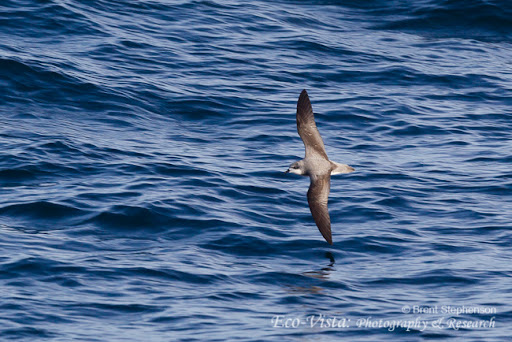 Another Pycroft's petrel zipping past. 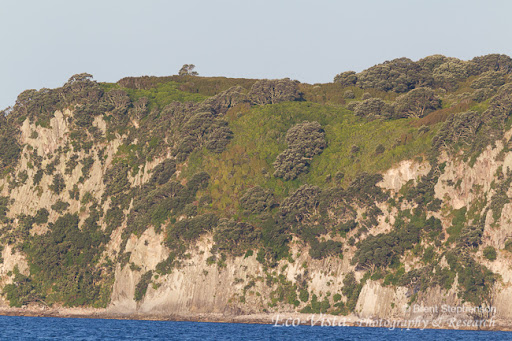 One of the islands on dusk.

Posted by Eco-Vista | Brent Stephenson at 06:47