So the other day I was rifling through a stack of mail received during my time away (yes I still haven't got to the bottom of it after being home now for two weeks!).  There was an unmarked folder in the stack which I opened, and in it was an award!  It was a Meritorious Service Award from the Ornithological Society of New Zealand.  To be honest I was shocked and surprised, and really hadn't expected anything like that.

A couple of months earlier somebody had tagged my in a photo on Facebook.  It was a picture of the front cover of the latest Southern Bird magazine - produced by the OSNZ.  I failed to recognise why I had been tagged, but going back to it see that there is a citation in the for this award...come on people you have to be less subtle than that! ;)

"Brent Stephenson has been the webmaster for the society's website since around 1996.  During this time he has maintained the pages and content to a high standard even though he has often been absent overseas on business. The redevelopment of the website would not have been possible without Brent's sterling work over the years."

So thanks very much to Bruce McKinlay for the nomination, and to the OSNZ for the honour.  Much appreciated. 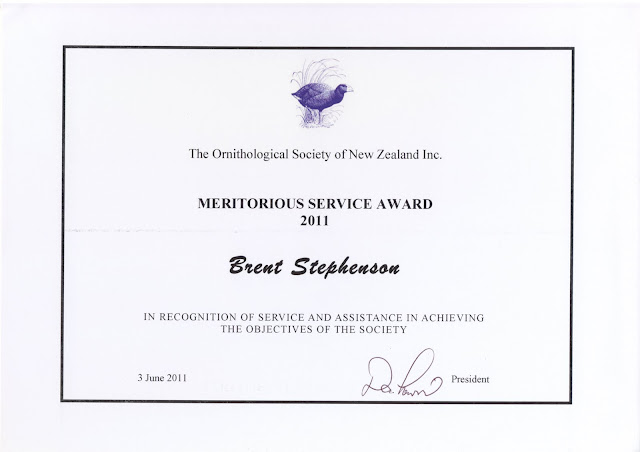 Posted by Eco-Vista | Brent Stephenson at 10:43