Off to a ripper of a start

Well yesterday I headed across the Cook Strait on the Interisland Ferry in the morning, and picked up my two guys for this next trip. The tour is organised around getting good video and photos of as many of the New Zealand endemics as possible, and with some good fortune we have included a visit to a rarely visited island in the itinerary (more on that in a few days). This is the main reason we are starting in the South and ending in the North, although the direction in which we travel will not mean anything for the birds.

So I picked them up from Willowbank in Christchurch, where they had spent several hours having arrived in the morning. We then drove to Fairlie to stay the night after some awesome wood-fired pizzas for dinner.

Early this morning we headed through to Lake Alexandrina to try for black stilt, and although we found a hybrid nearby, no luck, although a few waterfowl ticks were a good start. At Mount John we found a large covey of chukar, but no falcon, and then we moved on to find not one, but probably FIVE black stilt, all adults, and managed to spend about 2 hours with three of them getting fantastic photos and video. The birds were so calm and confiding, and they fed right towards us at times down to just a few frame filling metres! Fantastic.

We checked out some lakes for Australasian crested grebe and NZ scaup, getting some good views and video, and a few fleeting shots of black-fronted tern. We then tried for Baillon's crake, and although I glimpsed one, it wouldn't play the game and so we gave up and moved on, as this was not a priority species.

We checked in to the accomodation and before long a falcon flew right over giving good but brief views, before we saw it again harassing a harrier nearby. Not too shabby, black stilt and falcon on the first day, and a fantastic dinner with some lovely Central Otago white wine to wash it down! 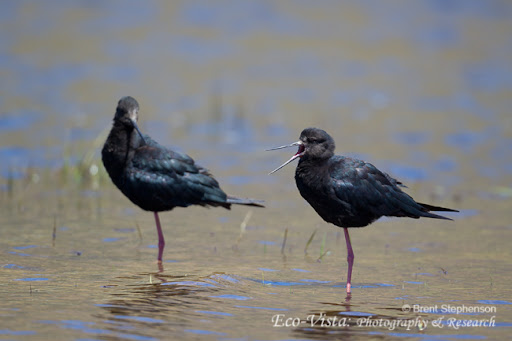 Two of the adult black stilts roosting together, but not sure who was yawning at who! 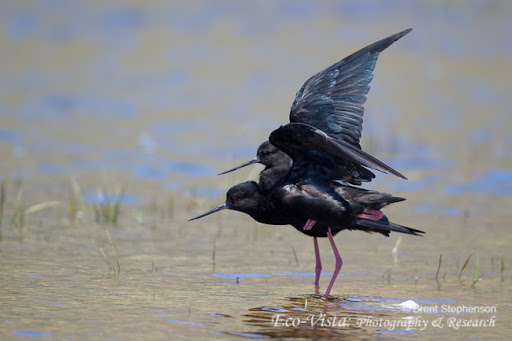 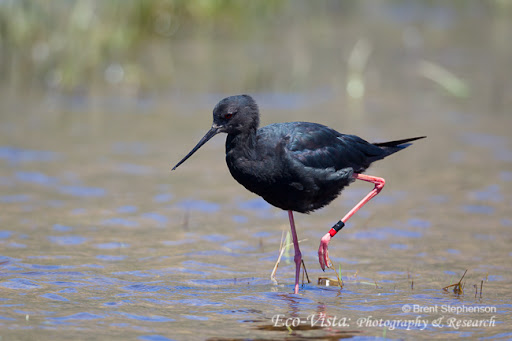 Posted by Eco-Vista | Brent Stephenson at 22:55