The end of Jungle Rivers and now Asa Wright

Well, got off the Clipper Adventurer today after an awesome cruise.  We started in Belem in the Amazon, with three days there then travelled northwards spending a day each in French Guiana and Suriname, a couple of days in Guyana, a day in Tobago, and then yesterday in Port of Spain, Trinidad.  Encountered some rain, but got to see a heap of stunning places, scenery and wildlife.  Not sure what the final tally on the bird list was but probably well over 200 species for me personally with many of them new.  Also three species of monkey, a few lizards and lots of great insects.

I have posted a whole bunch of images onto my Eco-Vista facebook page and selected a few of the best for below.  I'm now staying at Asa Wright Nature Centre in Trinidad for a few days, before a few more days at another lodge.  Asa Wright is outstanding!  The staff are super friendly and knowedgeable, the dinner tonight was great, and I had probably 12 lifers just from the verandah this afternoon...that's after spending the last two weeks already in the neo-tropics!  Had both white-bearded and golden headed manakin, five species of hummingbird, and scope views of bearded bellbird, black-tailed tityra, and channel-billed toucan, and bat falcon.  Stunning!

We just did a night walk and had land crabs, lots of cool arachnids (large harvestmen, a scorpion, and several whip-scorpions) as well as my first tarantulas!!!  Super cool - Trinidad cheveron tarantula.  Also a small snake which we will ID from the books here in the morning.  It's up for coffee at 6am on the verandah again, so better get off to bed! 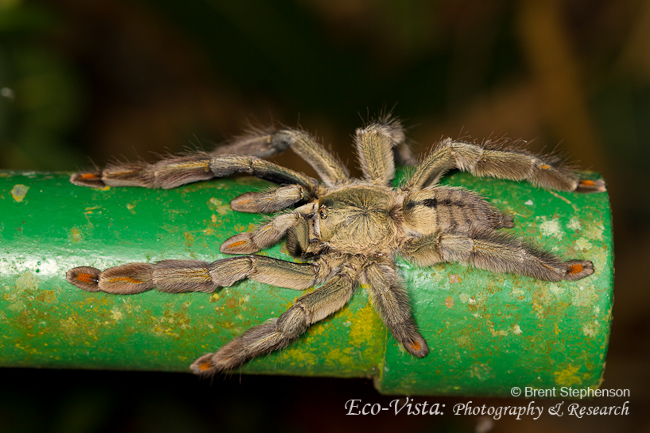 Posted by Eco-Vista | Brent Stephenson at 14:40